The winegrowers and winemakers

Soft and humid climate, abundance of sun, fertile black soils, and peculiarities of valley and mountain relief favored development of intense agriculture and livestock breeding among Moldavians. In the late XIX century the former Bessarabia Governorate occupied one of the first places respecting the square of vineyards and Moldavian wines were highly demanded in interior and exterior markets. Only in the Ackerman District there were more than 800 vineyards and 40,000 buckets of high quality were annually produced.

The exhibition shows primitive tools for cultivating vine which Moldavian peasants used for centuries: light axe and vine knife “kosor” and baskets woven of vine, wood buckets to store grapes during harvesting. Growing and cultivation of vine required much  labor inputs of work  and time. 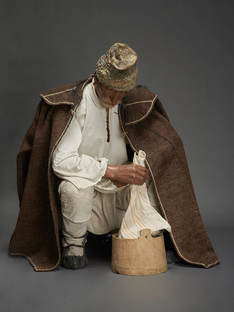