Home: Collections and Expositions: Exhibitions: The peoples of the Volga and Ural regions in the middle XIX-early XX cc.

The peoples of the Volga and Ural regions in the middle XIX-early XX cc.

The authors of permanent exhibition tried to how not only traditional culture of every people separately but also the specifics of multinational region in a whole.

In spite of differences in languages and origins the culture of peoples inhabiting the Volga shores has many similar features related to common territory, unity of historical fate and economical development.  The common features in culture of people of the region are characterized in the introduction part of exhibition.

The main part of exhibition telling about culture of each people is arranged by thematic principle. Featuring every people the most typical for traditional culture of this people sets of artifacts were selected from huge diversity of ethnographic topics. Particular attention on the exhibition is paid to central scenes which recreate unrepeatable, expressive images of every people through unique authentic material. These are: “Hunting log house” (Komi-Zyryane), “On the porch” (Komi-Permyaks), “Barn-kenos” (Udmurts), “Wedding” (Mordva), “Chimneyless log house» (Mari), “Making of sacks and mats” (Chuvashes), “In movement” (Bashkirs), “Woman’s side of Tatar house” (Tatars).

The Komi-Permyaks often passed warm season on the porch facing the yard. Here under the shelter peasants made necessary utensils and clothes: wove baskets and belts, embroidered.

The hunting log house of Komi-Zyryans served as lodging for the night and a temporary housing. It was low (on the level of human height) construction of cut poles or thin logs with shed roof covered with sod, tree bark, fir branches.  Bull bladders were inserted in small side windows; the interior of log house had plank beds, benches and table.  Oven was fired without chimney and log house was lighted by birch splinter. The utensils used by huntsmen were made of wood or birch bast.

The typical Udmurt outhouse building was barn (kenos) often two-stored. The lower room served as food storage and on the second floor where woman was absolute mistress the instruments of woman crafts – spinning and weaving and clothes made by women’s hands were kept. Here the meetings for sewing dowry were organized and at wedding bride was dressed in clothing of married woman. In kenos the newlywed spent their first wedding night in any season.

The Putting of Bride’s Dowry

Among the Mordva all the important moments in human’s life were accompanied by various rites. Most of rites were related to wedding. Some researchers count more than 30 rites. Special ritual was dedicated to putting bride’s dowry in special chest-vat. This vat hollowed out of entire trunk of a lime-tree and decorated with carving the father-in-low presented to his future daughter-in-law before wedding. Previously the vat was incensed against with lighted chip, silver coins, a loaf of bread, cakes, a pair of bast footwear and then clothes were put on the bottom.  Married woman relatives of bride put her dowry in vat and she was sitting near with “mourning” handkerchief and wailed. The wailing of bride accompanied the entire wedding rite. It was believed that the more tears would be shed by girl leaving her parents’ house; the more fortunate would be her marriage.

Among Mari outbuildings the ancient type of dwelling kudo – a chimneyless log house with shed roof and earth floor conserved. In XIX century these constructions were used as summer kitchens. The furnishing of room was very simple – wood benches and shelves with wood utensils. In summer time in kudo a cast iron pendant cauldron hanged to the ceiling by wood sliding hook was used to cook food at the open fire.  The smoke of fire freely emerged through slots in a ceiling or through an opened door.

The Sack Weaving – Making of Sacks and Mats

Among Chuvashes land deficiency was one of the reasons of development of supplementary crafts generally related to use of region’s forest resources. Significant place among them occupied the sack weaving – production of mats of lime-tree bast. They were woven on primitive vertical and horizontal looms which in winter were stood in log house and in summer on the yard near the house wall.  All the members of family participated in work. The Chuvash weavers provided with packing materials numerous owners of trade ships in Volga.

The Woman’s  Part of House

The specifics of interior furnishing of Tatar dwelling was plank platform situated along the entire frontal part of log house. There people slept, ate, received guests.  Rugs and doormats were put on plank platforms, wools near platforms were decorated with patterned towels, gaudy textiles and prayer rugs.  Blankets, pillows, mattresses, featherbeds were put on plank platforms. There was a table sometimes in the Tatar dwelling, but it wasn’t used for dinner, it was stood for samovar and kitchenware. On the line of joist a curtain was usually hanged which was drawn in presence of outsiders separating woman’s side from man’s side. The presence of woman’s side in the Tatar house was due to Muslim custom of women’s seclusion.

The Roaming of the Steppe Bashkirs

At the turn of XIX-XX cc. the livestock breeding as the main occupation remained only among the Eastern Bashkirs who continued to live semi-nomadic life in mountain and steppe areas. Their traditional nomadic dwelling was felt cart. In war, weather the livestock breeders passed most of their time on the spread felt rugs before the cart.  Here they received guests entertaining them with playing kurai–old musical instrument and serving them kumuss. Kumuss the beverage of fermented mare milk was valued because of its high nutritive and healing qualities.  Slightly foaming, perfectly appeasing thirst and hunger it was especially esteemed among nomads from times immemorial.

The Art of Embroidery

The clothing of the peoples of the region is abundantly represented at the exhibition in all diversity of its separate elements and local variants.  Its embroidered examples provoke particular interest. Embroidery is one of the oldest ways to ornament clothing occupies leading place in daily art of Volga women. Composition of ornamental elements on the articles of clothing, its distribution on flat surface, embroidery technique, color gamma are quite  sophisticated and perfect.    Girls were started to be taught embroidery since the age of 8-10 years and by coming of age they became masters, best of them were considered to be the most desirable brides.

The closing section tells about spiritual culture and people’s education. Deals with creation of writing among the peoples without writing and the role of the Kazan University as the main center of education, culture and science of entire region. 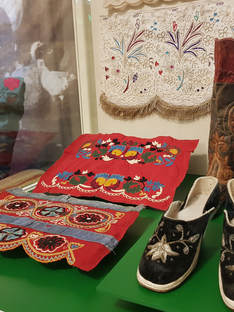 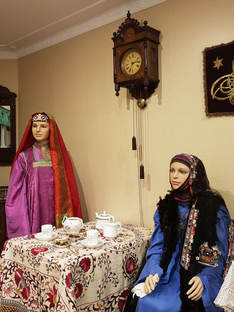 The goal of exhibition is to show the specifics of multifacetous Tatar culture outlining its uniqueness, distinguishing common and exclusive features of various groups within one ethnos.

In frames of exhibition space museum objects reflecting peculiarities of cult attributes, products of traditional crafts and occupations, costume sets, utensils, working tools of various ethnic, territorial and ethnoconfessional groups of Tatars of the Volga and Ural Regions of the Russian Empire are presented. Most of the exhibits date to the second half of XIX − early XX cc.

The introductory section of exhibition is dedicated to humanitarian mission of the Kazan University– the center for study and enlightening of all peoples of region. The illustration to this section is research works of the members of university and the members of the Society for Archeology, History and Ethnography. The publications of the translation commission of the Saint Gurias Fraternity explicitly demonstrate the role of this society which united two directions of activity – Christianization and enlightening. Tens of schools were opened, where children of local peoples studied not only the Scripture knowledge, but also reading and writing in their native languages and Russian, arithmetic and other subjects. Conventional scene demonstrating this topic represents country school.

The introduction also reflects particularities of Islam which is dominating religion and the base of worldview for the most of Tatars of region and determining the uniform norms of behavior in respect of ritual and daily life of various ethnic groups. In the exhibition space every thematic block showing the culture of Muslim Tatars includes characteristic religious attributes, for example shamaili − wall panel with quotations from Quran made in different styles.

Kazan was the center of spiritual life. Here religious literature was published, shamaili with images of saint places, quotations from Qurans, etc, distributed far beyond the region were printed. A miniature case with Quran, amulets with Quran surahs are not only religious attributes, but also the works of art of Tatar master craftsmen.

The cultural specifics of Volga and Ural Tatars were determined by city or country lifestyle, which is reflected on the exhibition.

The first section is dedicated to traditional culture of Tatars –urban residents lived in Kazan, Kostroma, Kasimov, and other cities. The thematic blocks Shop of Kazan merchant, Workshop for ichegi production, Jewelry production demonstrate the trade and craft specifics of the population of city.

In this section of exhibition the interior of room in city house is recreated. The scene with characters is illustration of tradition to receive guests on the women’s part of house. Costume sets show the peculiarities of woman festive garments of the late XIX century.

The symbolic boundary between culture of urban and rural population is the scene showing the celebration of Sabantuy. In present time this holiday continue to unite all the present no matter their ethnic affiliation and religion.

The section dedicated to economical occupations of Tatars living in countryside is represented with working tools, mainly livestock breeding instruments.

In the same section the interior of the women’s half of rural house of Mishar Tatars with conventional scene showing one of the stage of the name-giving ceremony of baby is recreated.

Especial ethnoconfesional groups of Tatar villagers in late XIX – early XX were the Orthodox Kryashens and Nağaybäks , the latter received the status of small-numbered indigenous people of the Russian Federation in 2000. The ethno-cultural particularities of Tatars professing the Orthodox Christianity are illustrated by the scene The Orthodox Festival: Procession.

Traditional headdresses, jewelry, examples of embroidery are represented on the exhibition as separate thematic blocks. These unique objects of museum collection of the middle XIX – early XX cc. show originality of Tatar traditional crafts and occupations.

The themes Men’s and women’s space, Motherhood and childhood, Culinary traditions etc, are shown with help of conventional scenes and complexes of objects. Particular role on the exhibition is given to traditional costume which is the brightest symbol of every ethnolocal group.

The photographic panel organically included in artistic design of exhibition help to create an idea about specific features of urban and country landscapes of region.

The historical photographs from the Russian Museum of Ethnography collection are additional source to show a series of topics in the frames of exhibition Traditional culture of Tatar of Volga and Ural Regions XIX – early XX cc.