The permanent exhibition on ethnography of Belarusians opens with the map of this people’s settlement and gallery of photographic portraits of Belarusian peasants from various governorates at the turn of XIX-XX cc.

The central place occupies a full-size model of log house. Traditional Belarusian house consisted of two rooms – a living khata and a cold anteroom.  The gable roof was covered with straw, the floor was earthen or mud. The Sacred Corner with icon and lamp was decorated with festive towel; the table was covered with home-made mantelpiece.  People slept on the plank platform behind the oven. The lighting of room with lighting stick remained until XIX century. The heart of the house was the large Russian oven, which occupied particular place in daily life of the East Slavic peoples.  It warmed the house, people cooked food, baked bread in oven, and they dried their clothes near it oven, children and old persons slept on the oven.  In some areas of Belarus people bathed in still warm oven and rural potters fired clay utensils in it. Many beliefs and rites were related with oven.

Traditional agriculturalists Belarusians dedicated themselves to many supplementary occupations and crafts, mostly to wood and flax treatment; the division into male and female labor was related to these materials.   Not only living, economical and cult constructions but also work tools, furniture, transport means, musical instruments and all kinds of utensils: cooperage, dugouts, basketry were made of wood, roots, bast, rods, straw, and reed.

Instruments and devices for treatment and spinning fibers and the weaving loom ready for using tell about women’s occupations. 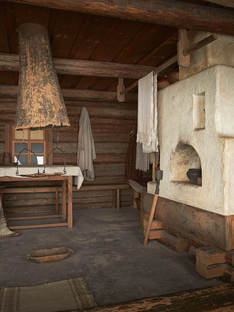 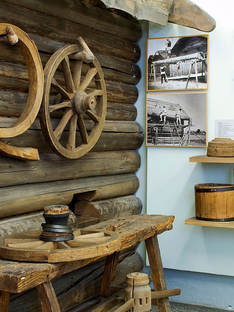 The woman costume consisted of shirt with neck-band or standup collar, striped or checkered skirt, apron and sleeveless jacket. The shirt and apron were decorated with embroidery, patterned weaving along the sleeves and the hem. Married women hid their hair under a bonnet, previously having wrapped them on a bast hoop, and over the bonnet they put on nametka – an ancient headdress in form of long flax towel. In XIX century nametkas were gradually replaced by manufacture-produced kerchiefs.  Girls plaited their hair in braids, didn’t cover their heads or wore wreaths leaving the top of head uncovered. In wedding the bride also put on a wreath of paper flowers decorated with silk ribbons and silk lace. The favorite adornments of Belarusian women were glass necklaces and strings of beads.

The base of men’s costume was flax shirt with straight cut of collar, always belted, which was worn over narrow pants. On their heads men put on wool cone-shaped caps, felt hats or hats with ear flaps. In XIX century   beaked caps appeared in Belarusian village.  The main men and women footwear were bast shoes of straight weaving. Instead of socks and stockings calves were wrapped with canvas stripes and tied atop with ropes. The ancient clothing of East Slaves was sewn without pockets; small objects were worn in hats, under clothes, in putties or in bootlegs. The outdoor clothes were sewn of canvas, wool or sheep skin. Men’s and women’s coats and jackets were identical and were always buttoned up to the left “woman” side.

Honey and wax in folk life

The archaic apiary complex is also interesting. Honey was favorite delicacy; traditional merry-making beverage medovukha was made of it, it was commonly used in folk medicine. Wax was applied for candle-making; propolis was used as a glue substance and for curing. The exhibition present the ancient way of beekeeping which has its origins in ancient honey hunting – collection of wild bees’ honey with their previous smoking out of tree hollows. Later peasants started to catch the swarms of wild bees in forest and settle them in artificial hollows or hollowed bee-hives – the borts. Borts were hanged on high trees with help of special wheel device, and a beekeeper climbed up by lezivo – a rope device with hook and wood seat. From XIX century the bort beekeeping was gradually replacing by more productive apiary beekeeping with use at first hollowed and then frame beehives.