The permanent exhibition “Russian traditional costume” opened for the public on December 27, 2008. It  presents  32 women, men and children costumes as well as the separate items of clothes and jewelry dated to ХIХ – early ХХ cc.

The clothes were sewn of flax, hemp and wool homemade textiles, as well as of manufacture fabrics: silk, moire, damask, velvet, brocade, half-brocade, cashmere,  cotton satin, chintz. Traditional Russian costume was distinguished by its beauty and elegance of its shapes; it corresponded to ethic concepts of Russian people and their notions about woman and man beauty.

The peasant costume of XIX-early XX cc. was varied; there were many types and versions of it. Woman costume was especially diverse. The researchers usually distinguish four of its varieties:  the costume set with sarafan, the set with poneva, the set with wool skirt and the set with kubilek.

The set with sarafan included shirt, sarafan, breast clothes /false sleeves, jacket dushegreya, shugai/ kokoshnik for women, crown for girls, leather or bast footwear. Apart of northern and central governorates of the European Russia it was widespread in central and lower parts of Volga region, in the Urals, Siberia and Altay.

The set of clothing with poneva consisted of shirt, poneva (wrapped skirt), breastplate / navershnik, shushun, kastalan/, complex headdress called magpie soroka for women, a headband for girls, leather or bast footwear. It was widespread in many governorates to the south of Moscow. These two costume sets differed in number of costume articles, way of wearing clothes, and combination of colors, character of adornments, peculiarities of ornamental motifs and details of cut.

The costume with wool skirt also including shirt with turn down collar, sleeveless jacket, sash and kokoshnik was known in several villages of southern Russia (The governorates of Tula, Kursk, Orel and Voronezh) among the descendants of the men of service sent from western lands to protect the Russian State against steppe nomadic peoples in XVI-XVII centuries.

The set of clothes with kubilek –a tight fitted dress under which shirt with broad sleeves was put on, together with hood-like headdress fixed on the hairdo and long thin veil was widespread among the Cossak women of Lower Don and Terek. 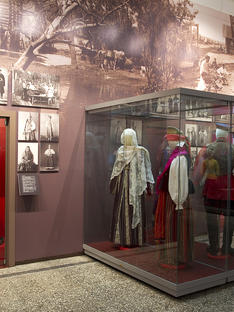 The characteristic feature of men’s costume was its relative uniformity in the entire territory of Russian people’s settlement. Regional or local differences were insignificant and consisted in location of ornament on shirt, its color gamma, technique of belt braiding and form of headdress. It was comprised of skewed-collared shirt with low stand-up collar or without it. The shirt was usually worn over narrow pants and belted with narrow belt. The costume was supplemented by hat made of sheep wool, leather boots or bast footwear.

In winters the upper dress of woman and men consisted of fur coat sewn fur inside, fur hat, combined with kerchief in case of women. In summer time wool caftans, home spoon coats zypuns, azyams and loose overalls   were worn.

The peculiarity of Russian traditional costume was that it divided people in accordance with their age, family status, and social position. The costume helped easily distinguish rich from  poor, not betrothed girl from  bride, old maid or married woman, young  bachelor from married man, solitary man from  man with family, widow from soldier’s wife, shepherd from miller, miller from potter, potter from smith etc.   Moreover, costume always corresponded to concrete situation or particular event in human life. The clothing put on at home in working days differed from the clothing in which people went to harvest, hay-making or sowing. The Sunday costume differed from the costume put in the Easter or Christmas; special “mourning” costume was required at funerals or mourning, in church groom and bride stand in front of altar in wedding costumes.  Clothes were attributes of many rites. Such ancient articles of clothes as shirt, wrapped skirt poneva and headdress had especially strong semantic meaning.  .

At the turn of XVII- early XVIII cc. the upper classes of Russian society started to wear the clothes of general European type. It occurred due to changes in economical, social and political spheres of Russia’s life and the decrees of Peter I of  1700 and 1702 prohibiting to wear national dress for nobles, merchants, officers and city craftsmen Traditional costume which passed long way of development became predominantly  the peasants’ clothes. In large villages situated near governorate and district cities and towns,  craftsmen settlements and  Cossack villages traditional clothes were replaced by the costume of European type as early as in  XIX–XX cc. In more remote areas, in Siberia, southern areas of European Russia it remained as late as 1930s. In the Old Believers’ villages of Siberia one can see traditional costume in use still in 1950s.