The permanent exhibition starts with photographs of Russian people of various ages and social groups taken in their everyday environment. They introduce visitor to the atmosphere of life in provincial Russia in turn of XIX-XX centuries.

The introduction section presents the map of settlement and shows the main stages of ethnic history of Russian people.

The first hall of permanent exhibition tells about economical occupations of Russian peasants– the techniques of traditional agriculture, husbandry, fishing, apiary, and treatment of fibers.

Agriculture, the base of Russian peasantry’s economy is represented by complete cycle of works– ploughing with wood ard and harrow, manual sowing from bast basket, and harvesting.  All the stages of agricultural works were accompanied with magic and church rites aimed to influence the earth’s fertility.  If men generally ploughed and seeded, harvesting of cereals was almost completely women’s task. 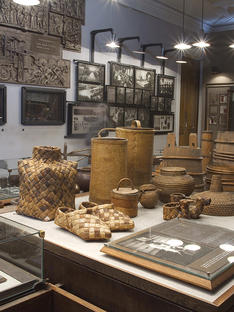 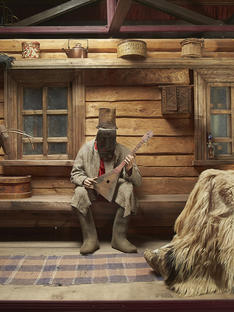 They harvested manually during all the daylight hours. They came to field with breast-feeding babies, who were under supervision of older children. Many beliefs and rites, “harvest songs”, and magic formulas were related with hot harvest time. Women put on special shirts and in the last day of works performed the ancient rite of tying the “St Nicolas beard”. Woman belted with towel several non-harvested rye ears, and then bent them to land as if returning the force taken from the earth by mature harvest. It should be put bread and salt under the “beard” to please the Saint Nicolas in hope of abundant harvest. This rite is reproduced in the scene “Harvest”.

In the same hall transport means and harness are placed:  a dugout flatboat, a low wide sledge decorated with wood carving and pattern of hammered iron, a yoke, painted bow and other articles of travel daily life.  On the first plan one can see the dugout flatboat with complete equipment for “shooting” fish made of the entire log. It is one of archaic methods of fishing in the shallow water in night time.  A fisherman lighted the river water with burning oakum tied to metal “luchnik” and shot with metal pointed wood harpoon large fish attracted and detected by his torch.

The second hall is dedicated to Russian traditional crafts where central place is given to wood treatment. Because of abundance of forest Russia was called “the forest country”. Houses were constructed of wood; all kinds of tools, furniture, chests, transport means, toys, and musical instruments were made of wood. Lapti (traditional footwear) were woven of bast and birch bark, cracked earthenware was wrapped in birch bark for firmness.  Wood, clay and metal utensils of various shapes and functions are demonstrated on the central podium.

From time immemorial painted and patterned stamped textiles were broadly used in Russia. Manual dying and colored patterning was made by rural craftsmen dyers in special workshops. The home-made textile was dyed in vats with pigment. Fabrics with patterns covered with wax, which after removing wax remained unpainted were also put in them. This method of making pattern was called “vaplenie”. Textile was more frequently decorated with print stamps with relief pattern.  A plank covered with paint was put on the fabric and beaten with mallet (therefore the name of craft –“naboika”).  Also blue fabric was put on plank painted with oil pigment and rolled with a wood roller.  For obtaining multicolored print fabric the number of planks should correspond to the number of colors.  Significant place is given to metal work – smithery and casting. One can see door brackets, fancy locks, lighting devices, bow bells, veterinary buckles.   Most of these casual objects are splendid examples of Russian metalwork art.

The third hall of permanent exhibition dedicated to dwelling introduces visitor to the world of Russian folk architecture and house daily life. Architectural carving endowed   the Russian village in northerner and Volga areas of Russia with unique specifics.  It decorated the frontal side of izba, cornices, prichelinas − concave planks, platbands, shutters, balconies and porches. The old examples of house carving were picturesque and elegant: lions, Sirin birds often with human faces, mermaids, vines and grapes, rosettes.  Decorative details of peasant log houses were closely associated with practical needs: frontal planks prichelinas covered the holes between log cabin and roof, platbands – between log cabin and window frame, the corners of log cabins were covered with carved planks. The roof gable was completed with ochlupen – a voluminous figure of horse or a bird that from old times had sacred meaning of house guardian. Not only living facilities, but also chapels, barns, gates and wickets were decorated.

In the same hall the conventional interior of northern peasant house with the Sacred Corner and strictly established by tradition arrangement of home utensils and implements is shown. In the center of hall one can see various peasant utensils: copper samovars, containers for sbiten’ (a sort of nonalcoholic hot honey drink), salt cellars, wood ladles, endovas − copper cups for beer and honey beer medovukha, lighting sticks of various shapes. Many of these objects served as indispensable attributes of family rites.