The history and culture of the jews of Russia

The objective of exhibition complex is to show the components of historical process of formation of specific spiritual-religious culture of Jews and to demonstrate ethnographic realities of Russia’s Jews daily life in XIX century.

The sources indicate early II millennium B.C.E as the time of Jews’ appearance in the Western Asia. In history of Ancient East Jews resembled their neighbors, but among the ancient Jews the concept of monotheism appeared and the formation of the Bible text started which later determined the nature of spiritual life not only of Jews, but also of Christians and Muslims.

The Jews were the people who still in antiquity suffered collapse of their own state, elimination of their main sanctuaries and hardship of life in alien land, however, they didn’t disappear as many peoples of the past in similar situation, rather they elaborated mechanisms of survival in diasporas. In the Middle Ages the life of Jews in small-numbered groups became historical norm. In many countries Jews actually turned into an ethno-confessional group with their own customs and norms important for economical life of every country and its international relations but surrounded by the atmosphere of prejudice. Not insignificant for ethnic survival of the Jewish people was strict following the spirit and letter of their own religion with its specific prescriptions and prohibitions; the adherence to literary culture which helped man to feel living where his books were was important.

In course of formation and territorial extension of the Russian empire in the late XVIII – early XIX cc. the areas of Baltic, Dnieper and Visla Regions inhabited by the European Jews alongside Caucasus and Central Asia populated by the Eastern Jews became parts of its territory. In all the places of settlement Jews were small but influential part of local population respecting the character of regional landscape.

The objective of exhibition complex existing at the Russian Museum of Ethnography is to show the components of historical process of formation of specific spiritual-religious culture of Jews and to demonstrate ethnographic realities of Russia’s Jews daily life in XIX century in accordance with circumstances evolved in different national environment. The cultural specifics determined exhibiting of several Jewish ethno-territorial communities: Ashkenazi, Caucasian (Mountain and Georgian) Jews, and Central Asian (Bukharan) Jews. Due to their prevailing number the Ashkenazi collections are applied for complex display of daily and religious particularities of the Jewish culture; the objects of the Eastern Jews help to attract attention to certain aspects of material and religious life. 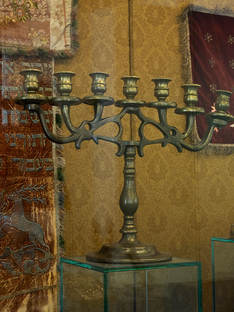 One of the precondition of formation of this collection which in fact is the core of the Museum of Jewish Culture in broader perspective was the fact the by early XXI century the Russian Museum of Ethnography became the institution which concentrated collections on the ethnography of the Russia’s Jews. The museum collections were forming by collecting work of museum personal as well as by handovers from museums of Russia and neighboring countries. In the Russian Museum of Ethnography the objects obtained in course of expeditions of the Jewish Historical-Geographical Society realized in the early XX c. including the famous collection of An-sky on the Ashkenazi Jews ethnography were preserved.

New complex with its broad chronological scope supplements the established tradition of organizing monothematic and regional exhibitions at the Russian Museum of Ethnography which material covers only the chronological period of late XIX - earlyXX cc.

The determining factors for creation of the permanent exhibition “History and culture of the Russia’s Jews” are development of museum work in Russia and research of national culture which led to appearance of museums of Jewish culture already in the early XX c., and also new understanding of problem’s relevance after long chronological gap.

Not insignificant is the fact that idea of creating this exhibition complex was among initiative of the President of Russian Federation. Realization of this initiative is contribution to further role of development of Petersburg as cultural capital of Russia. 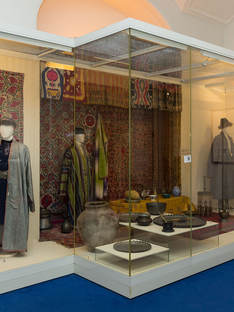