The peoples of North-West Russia and the Baltic region in XVIII–XX cc.

The exhibition of the Russian Museum of Ethnography “The Peoples of North-West Russia and the Baltic Region in XVIII – XX cc. is devoted to twelve peoples of this vast region  which since times immemorial played an important role in history of Russian state. For many centuries these lands were specific crossroad between Eastern, Middle and Northern Europe. Here Baltic, Finnish-Baltic, Germanic and Slavic peoples lived, traded and not infrequently waged wars. Early cultural contacts of eastern areas of Finland, Estonia, Latvia and Lithuania were dealt with neighboring Russian lands; local population paid tribute to certain Russian princedoms. The Finno-Ugric peoples Chud’, Vod’, Ves’, Lop’. Korela, Izhora – the indigenous population of territories to the east of the Narva River in the areas of Volkhov and Luga Rivers and the Lake Ladoga were included In the sphere of allied, cultural-economical and later state-economical relations with Rus’.

The raids of Crusaders started in XII c. C.E.в. incorporated Finns, Estonians, Latvians, and Lithuanians in the sphere of development of the West-Christian culture and history. In many aspects the specific of cultural tradition determined by coexistence of various confessions– Orthodox, Lutheran, and Catholic. 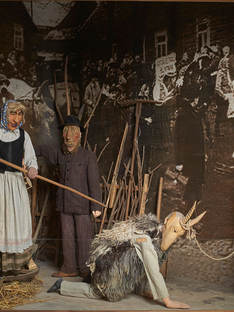 The permanent exhibition “The Peoples of North-West of Russia and the Baltic Region in XVIII-XX cc.” is the first experience of recreating by museum means history and culture of the population of Baltic and Barents regions throughout XVIII-XX cc.  Arranged in format of cultural-anthropological reviews it consists of 4 sections: The People of Sea”, “The People of Land”, “The People of Forest” and “The People of Tundra”. Every section includes the subjects that help to highlight the brightest and the most original aspects of ethnic tradition of peoples-neighbors, to demonstrate genetic relation of a series of cultural phenomena, and to show examples of    historical-cultural mutual ties and influences both in past and present. 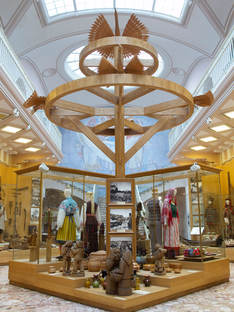 The exhibition presents more than 700 authentic artifacts of traditional culture of XVIII – XX cc and about 200 rare photographs on ethnography of the Baltic-Finish peoples of North-West and Swedes, Latvians and Lithuanians.  Several generations of ethnographers of XX century worked in museum or cooperated with it as correspondents participated in formation of these collections. The visitors of exhibition can know the way of life of region’s population, their spiritual life, traditional family and calendar rites and festivals, to see various objects of daily use, everyday, festive and working clothes.  For the first time the unique collection on daily life and culture of Saami is exhibited.