The movement along the permanent exhibition is arranged  as a road discovering to visitor various cultural landscapes: bystreet in city, rural farmstead, monastery courtyard, picnic, etc.

The permanent exhibition "The Peoples of South Caucasus. Late XIX – early XX cc." is a part of the complex “The Peoples of Caucasus” which is still under construction. The artistic design of the exhibition “The Peoples of South Caucasus” allowed to create an image of region situated to the south of the Greater Caucasus and to restore the architectural layout of museum halls elaborated in early ХХ c. The movement along the exhibition is arranged as a road consequently revealing to visitor various cultural landscape:  bystreet in city, farmstead, monastery courtyard, picnic, etc. The theme of road is emphasized by the visual row situated in the upper part of walls composed of historical photographs. The right side of halls is mainly dedicated to men’s occupations, the left side– to women’s ones.

According to general idea, the existing scenes and object complexes form the so-called exhibition of regional type, which reflect both common cultural elements of the entire South Caucasus and materials on ethnography of separate peoples of region.

The exhibition opens with the section reflecting economical-cultural adaptation of the region’s population. It contains the following thematic units: "The ethnic territory and settlement”, “Economic activity: agriculture, husbandry, viniculture, cooking and utensils, wool   treatment”, “Settlements”. The displayed tools and costumes of various ethnic groups of region reflect the specifics of lifestyle in different landscape zones of South Caucasus. One can get idea about settlements and dwelling using authentic photographs and architectural models. An introduction to exhibition serves also the section dedicated to daily life of South Caucasian city: conventional scene represent the workshop of a Tiflis jeweler. 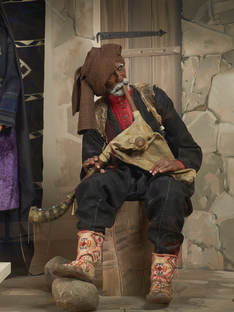 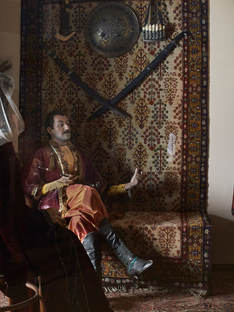 The core of exhibition forms the sections showing the ethnic culture of Georgians, Armenians and Azerbaijanis. The interior of the Abkhaz smithery-shrine is presented near them.   Screens in every sections offer to visitor’s attention reference historical-geographical information, photographic materials, representing landscapes, variations of folk costume, and sets of objects.

In the section “Armenians” brief information about history, main dogmas and practices of the Armenian Apostolic Church playing special role in conservation of ethnos in other confessional and other ethnic surroundings is given. The attributes of official church practices, religious objects used in daily life outside the church and the memorial stone-cross khachcar unifying official-clerical and traditional-mundane aspects of Armenian culture are destined to show this idea. In term of the topic “Dwelling” the sacred complex is exhibited, which base form so multi-significant element of Christian culture as the manuscript containing the Holy Scripture.

In the section “Georgians” two aspects are emphasized in this topic; on the one hand, early conversion of Georgia to Orthodox Christianity and important role of the Autocephalous Georgian Orthodox Church  in spiritual consolidation of people, and on the other hand  – the synthesis of Orthodox orthopaxy  with local religious cults. The latter are characterized by objects associated with the cult of Saint George, praying and sacrificial sacred objects and elements from highlanders’ shrine.

In the subsection Azerbaijanis the role of Islam in the South Causcasus is noted and the specifics of the Shia Islam consisting in existence of the feast-mistery  Ashura in the honor of the Shia saints Ali and Husayn, stronger  than in Sunni Islam materialization of cult symbols, special role of amulets and divination objects are shown.

Male occupations are represented by complexes of Armenians’ artistic and industrial activities in such specializations as masonry, smithery, coppersmithery print, jewelry, fabrication of music instruments. The scene “In tea-house” of the subsection “Azerbaijanis” shows elite culture of wealthy population of eastern city. For male socialization of Georgians the importance of the arms and personal military courage of Georgian high lands is stressed.

Woman subculture of South Caucasus in the subsection “Armenians” is presented by woman figures: “maiden”, “older mistress”, “daughter-in-law” put in context of house and house space. In the subsection Azerbaijanis, one of the wedding circle rites «Farewell of bride with her parents’ house” is represented.

Ethnic subgroups are presented at the exhibition as much as it’s possible. The most relevant it’s done in the subsection
“Georgians” emphasizing particular complexity of this ethnos.
The exhibition ends with them of folkloric-musical unity of the peoples of South Caucasus.