The cultural specifics of region were determined by coexistence of two different civilizations – the settled one and the nomadic civilization which reflected in structure of permanent exhibition embracing two main sections. The first section is dedicated to traditional culture of Tajiks and Uzbeks who were mainly settled agriculturalists. The second section characterizes the culture of semi-nomadic peoples of region – Kazakhs, Karakalpaks, Kirghizes and Turkmen who settled in the areas unfitted for agriculture, in general dedicating themselves to livestock breeding.

The first section is devoted to traditional urban culture of the central part of region – the territory of Central Asian Interfluve, which creators in equal degree were Uzbeks and Tajiks. In Bukhara, Samarkand, Khiva and other cities they formed trade and craft population and had many features in common in their ritual and daily life.

On the exhibition on can see examples of traditional crafted textiles, copper utensils with fine engraved patterns, painted ceramics, original jewelry, skilful silk embroideries. These objects are shown included in daily life scenes helping to demonstrate the context of their use.

One of scenes presents the rite of initiation of a craftsmen guild apprentice to mastership. The head of guild ties the initiated apprentice with a belt – the sign of his new status. In acknowledgment the apprentice presented his teacher a set of clothes. 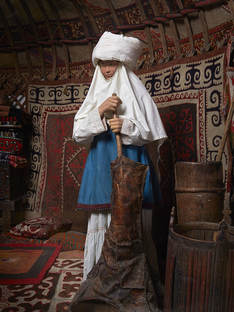 The exhibition recreates traditional interior of gala room in city house. Here the ancient rite of the first putting of baby to cradle is shown which was accompanied with magic actions for his health and well-being.

The unique exhibits are theater dolls – the glove puppets and the common ones shown in the section dedicated to the culture of urban shows.

The objects related to Islam a Quran manuscript on a stand, prayer rug, circumcision knife and vessels for ritual ablution are shown in separate section. The costume and attributes of dervishes who were the adherents of Sufism – the mystic- ascetic movement of Islam comprise special complex.

Separate subject is dedicated to culture of semi-nomadic Uzbeks whose traditional occupations were livestock breeding and crafts related to treatment of wool and leather.

The rare exhibits characterize the peculiarity of culture of mountain Tajiks and Pamir peoples which for a long time conserved archaic features in condition of mountain isolation. Among these objects one can see hand-made ceramics, wood utensils with carved ornament, inflatable leather sack for crossing highland rivers. The wedding face curtains of Mountain Tajik women which embroidered patterns include ancient magic symbols are unique.

The second section. The image of steppe space creates special atmosphere for demonstration of exhibits, telling about the culture of livestock breeding peoples of regions. Its specific forms were determined by mobile life of nomads, the most explicit testimony of which is frame dwelling – yurt, which construction and picturesque interior are reproduced on exhibition. The furnishing of Kazakh yurt is enriched by the scene of guest’s reception characterizing the custom of hospitality –the most important norm of nomadic etiquette.

The special importance of moving for the entire nomadic lifestyle is reflected in the theme in which the preparation for departure, movement of livestock by shepherd, loading of home belongings on a horse are conventionally represented on example of Kirghizes. Movement, freedom, space are the primary welfare for nomad, therefore in their view the notions of movement and life were almost inseparable

The Turkmen daily culture is represented by famous carpet products which surrounded man throughout all his life. The role of carpets was great in Turkmen wedding ritual, which is represented on the exhibition by the ritual of meeting bride in groom’s house. Here so rare exhibits as camel festive harness of wedding train and wedding tent of bride put on its back are shown. A complex set of silver adornments played special role in Turkmen woman wedding costume.

The bridal costume is also in the center of the complex of Karalpak exhibits. Every element of this costume is unique, first of all it’s gorgeous headdress in form of ancient helmet, and dress with rich embroidery which was named “a pattern of chain armour”.

The separate theme is dedicated to production of wool textiles and felt — the materials which helped nomads of the region to adapt to severe climate conditions of mountain-steppe stripe of Eurasia. The colorful ornament of felts encapsulate the world picture of their creators, symbols of fertility and prosperity, producing the feeling of joy and harmony.